In the air, Thompson immediately located the building he has picked as a rendezvous point from the plane and attempted to steer his chute towards it.  The wind had other ideas and buffeted at him, pushing in the opposite direction; it sure was choppy tonight.  There was no chance any of the squad were going to be able to get to the building while in the air –they would have to regroup on the ground.  He cursed under his breath.  At least this night couldn’t get any worse, he though wryly.

When his boots hit the ground he got the feeling that he was about to be proven wrong.  He got his bearings and began walking towards the RV point.  As he passed the darkened doorway of an empty looking house, a figure stumbled out of it.  Thompson’s hard-wired reflexes had him behind cover and drawing a bead on the figure’s head within an instant.  His trigger finger froze, however, when the staggering, shuffling man reach the illuminated circle of a streetlamp.  It was a dead body.  Walking… 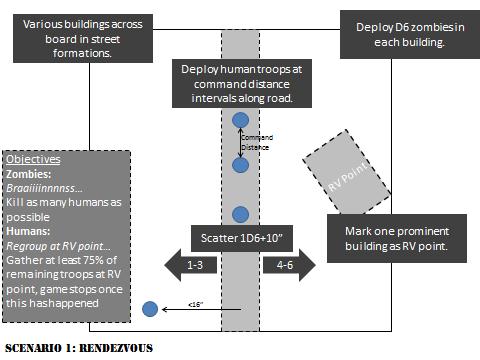 The human squad have dropped into a built up area that has been somewhat destroyed by bombing.  The board should reflect this with plenty of wrecked buildings.  One of these should stand out in some way, and be labelled as the RV point.  A road should run down the middle of the board, acting as an intended landing ground for the paratroopers.

The human squad is made up of 7 ‘trained’ human soldiers, 1 ‘elite’ and 2 ‘rookies’.  Most are standard troopers, armed with a Lee Enfield rifle or Sten gun with fitted bayonet.  Sergeant Thompson is armed with a pistol and one of the ‘trained’ soldiers is a heavy specialist, armed with a Bren gun LMG.

A random number of zombies start on the board, determined when deploying.

Place the paratroopers in a line down the road in the centre of the board.  They will then each scatter 2D6+10” either left or right.  This is where each soldier lands and dumps their chute.

The game is over when:

Have an opinion? Cancel reply