So my gaming buddy Chris and have decided to get into playing Saga so I asked for a viking warband and the rules for my birthday.

I just got around to getting some paint on the first four models. I used coat d’arms’s super shader on these for the first time and I’m quote happy with the results. I’m also quite happy with the bases -the concept was a rocky area in early winter, around the first snow. The snow flock I bought is a bit weird, but I think it gets the job done… I’m going to add the shields later. 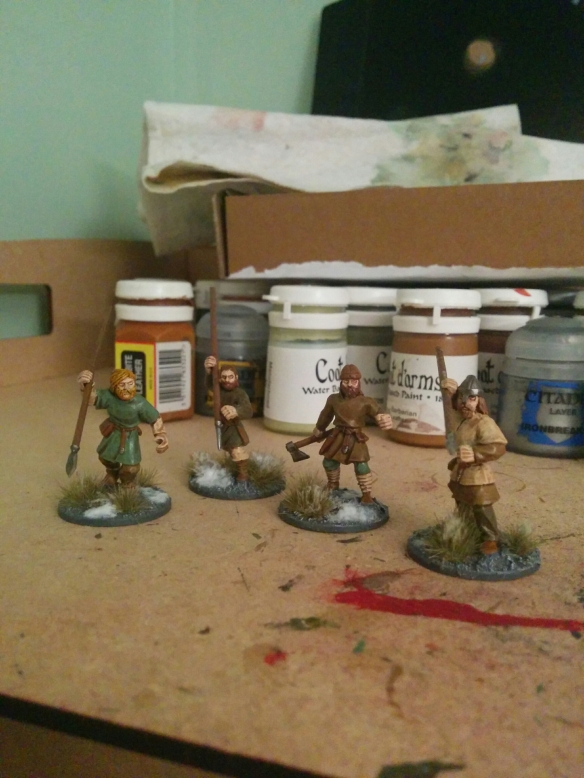 I’ve been playing a lot of Kings of War lately with my friend and gaming partner Chris. I wanted a nice way of showing wounds accruing on units that was better than just putting dice by them, so have made these. The bases with built in counters are from Warbases. I’m pretty happy with how these have turned out, and there are more coming -a beer barrel springing a leak is in progress… 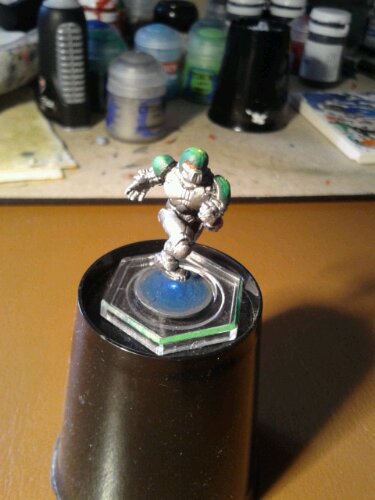 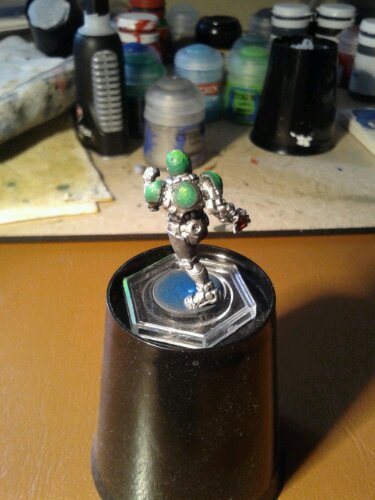 I just finished painting a test model for my human Dreadball team. I’m really happy with how he turned out. I’m going to use the team as practice for layering. I think the green worked well, but the silver needs a bit work (I drybrushed it, which I think was a mistake). 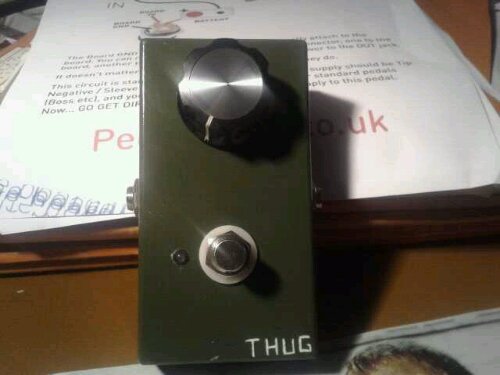 I just finished this fuzz pedal kit from Pedal Parts UK. It’s a clone of the Meathead fuzz, which is itself a version of the Fuzz Face circuit using silicone transistors. It is very loud and meaty and I love it…

Went to see the new Bond yesterday.  I’m not going to review it properly because I’m no good at that but there is something that really irked me about the film.  Unfortunately, it happens at the end, so only follow the jump if you’ve seen it/don’t care.

END_OF_DOCUMENT_TOKEN_TO_BE_REPLACED

Last week, Chris and I had a bit of a play through of some rules he has been working on for space marine vs space marine combat, in small squads.  The idea is that kids can build their own squad and have some kind of league or something going on.  As we got through the game, people started getting into hand to hand combat and we realised that the system we originally came up with was pretty boring.  It ended up with two combats going on forever and each turn involving just taking turns to roll dice.  So we decided to have a rethink.

The new system we came up with is slightly borrowed from Bushido, a rule system I know a little about, but have never played.  We decided that all models will have a combat rating (average will be 4), which forms their combat pool.  This can be modified with things like weapons and abilities. During combat, each player secretly divides up their combat pool into Attack and Defense dice, then reveal how they have divided them up.  The player whose turn it is rolls their attack dice first, with any dice over 4 counting as ‘hits’.  The defending player then rolls their defense pool, and each dice they roll over 4 knocks one ‘hit’ off the score of the attacking player.  Any hits remaining cause damage on the other model in the same way as shooting does.  If the defending model is still able to (i.e. is still alive and hasn’t been knocked down), he then rolls his attack dice and the same process takes place.

I like this system, because it fits in better with the shooting mechanic we had developed, and adds a bit more a ‘game’ to combat -rather than it being entirely based on luck.  This is, in fact, almost like a mini-game within the larger game.  If there are additional combatants in a game, they add half their combat pool to the main combatant, which is a more elegant solution than we had before.  It also makes combat more bloody -with higher damage being doled out.

There are still things to iron out and extra little flourishes to add, but I’m really happy with this change. 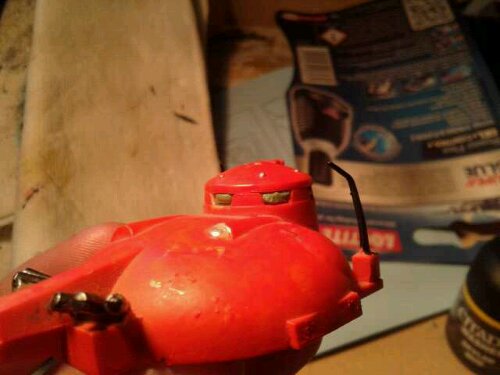 I’ve finally made a start on doing up the old predator. I’ve greenstuffed in the holes around the hatch on the turret and will prime that once the gs has cured.

So lately I’ve made a bit of progress with the Marine army.  I finally got around to finishing the bases on the first tac squad and photographing them, I finished building the Mk2 Assault Marines She Who Must got me for my birthday and I bought and built the plastic Captain model.  I built him as a very basic version with just a bolt pistol and chainsword because I only plan to use him in small games where it doesn’t make sense to kit him out loads at the expense of ordinary troops.  I intend to eventually do a conversion of one of the Mk2 or Mk3 armour marines from Forgeworld into a more well equipped captain, using some of the parts from the plastic kit.  Anyway, have some pictures:

The symbol of the Screaming Eagles (Aquilae Clangens), 1st Battle Group of the Tips of the Spear (Cuspidis Teli) Space Marine Chapter.

The fashion at the moment among space marine players is to paint one’s army as a pre-existing chapter and stick religiously to that set of fluff. I don’t like that. I’d much rather have the freedom to make up my own chapter and give them some fluff. That’s why I made up the Tips of the Spear for this marine army.  Here’s some fluff I wrote about them:

END_OF_DOCUMENT_TOKEN_TO_BE_REPLACED

Other stuff of mine